Rising star Molly Lovette stopped by Evans Glass to show Bill the cover of her latest single Hey Hey.  You may recognize the Evans Glass pink Cadillac on the cover! 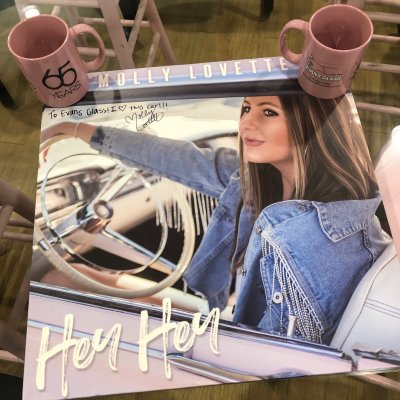 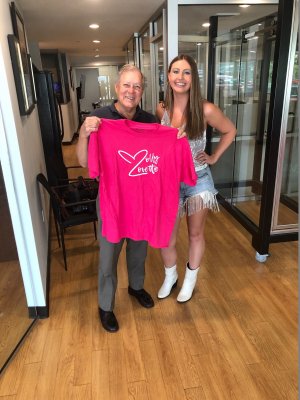 Story Time With the Pink Cup

Nate from Smyrna, Tn called the office and wanted someone to come out and consult with him about his shower. He said the one he had was old and it was falling down and it probably needed to be replaced. He ask if he could use his old glass and just put new stuff on it; he just wanted some direction. SO I said, let me get your name and information and I'll have one of our guys call you because usually we are not able to re-use the glass. So Nate said send someone, then he proceeded to tell me that he was a Realtor in Smyrna and that he had sent many people our way, but now he was in need of our services. And he went on to tell me that he took a Strategic Marketing class at Belmont University and that his professor Dr. Lambert told his class about doing some marketing strategies with Bill Evans and the pink cup for his company. And that he had remembered that story all these years and what an impact it made on him and he was so amazed that this one story had stuck with him so long. He said it's been about 12-15 years, but now I'm calling y'all because I need your services and wouldn't call anyone else!

Moral of the story is; Advertising, IT WORKS!

"Good evening I know this is probably a strange request here my name is Remona and I love coffee mugs. I collect them everywhere I travel. And over the years I have seen  your commercial with your pink coffee cup. I am wondering is there any way I can purchase one of those coffee mugs.”  Bill hand delivered a mug to Remona! 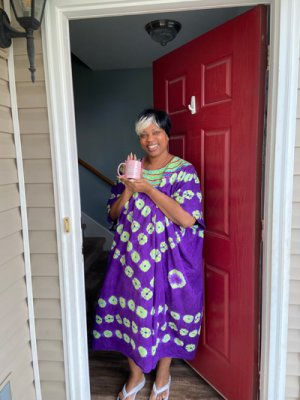 Bill wanted to thank the people at Nashville Public Television (Npt) and Kayla Todd, in the photo, for having us out to measure for a new window. Andrea, the receptionist, said, “Your men were here 3 years ago. They promised to bring cups, but never did.” Bill Evans told her that he knows a guy and he would bring the cups. Bill took them back today. He also got to meet Kathy McElroy, their CFO, and they talked about NPT and Nashville. 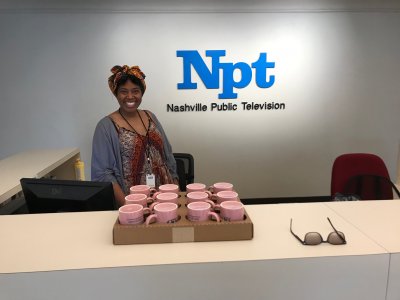 This is Andrea, I met you yesterday at the front desk.  I just want to thank you for bringing the case of Evans Glass mugs.  I was so excited to see them and my associates are also excited about receiving them.  In today’s world, it is hard to find those who say they will do something and actually do it, but you did and I am once again, a believer!

Thank you again and it was a pleasure meeting you!  Have a wonder safe and Happy Memorial Day Weekend! 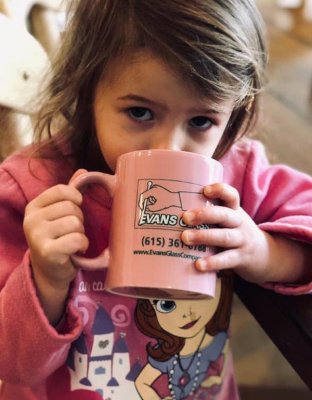 My husband said you all did his shower door and we love it and you guys did a great job. But we did not get a pink cup...can you tell me how we can get one? The surprise will be very nice he drinks coffee every day. Myself I drink hot tea or coco/hot chocolate. Also we just got married 07-07-18. My first marriage and I am 56 years young. Smiling. He lost his first wife to a heart attack they had been married almost 30 years they were childhood sweethearts. We are so in love it is not even funny. We knew each other growing up in Cheatham Co in the Ashland City and East Cheatham communities and we reconnected at church . Thanks for letting me share a little with you God Bless

I should have written weeks ago to thank you for the coffee cup you have me to give to my daughter, Faith, at Christmas.  Was one of her favorite gifts and stopped the problem of her grabbing mine to use.  Actually mine looks faded and old compared to her new one!  She has taken it to Vanderbilt and uses it daily.  Amazing how the simplest of things can sometimes be the most meaningful and appreciated.  And now that I now where to find that pink automobile, I intend to bring my daughter in this summer to see it!  May God bless you and those around you this Easter and always.

Subject: The shower is finished!
To: Wayne Gregory

Not only do I love you, but I adore you! Thank You so much! They did a
beautiful job! I didn't think I wanted a pink cup but I will drink from it proudly now.
We love Evans Glass! Thank you! Thank You! Thank you! 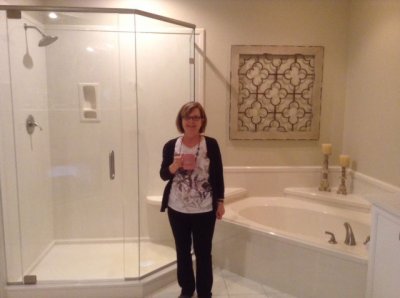 "Are you the guy on TV selling glass with the pink cups?"
That's how I was greeted by a pleasant man during an intermission at a Nashville Predators game recently.

Though I'd like to think he recognized me straightaway, I think the big "Evans" embroidered on the back of the jersey I was wearing may have helped him place me. He said he was an Evans, too--Gary Evans, to be exact, and he asked how he could get a pink cup. I offered to send him one of our limited edition 60th Anniversary mugs.

Soon after I sent a cup his way, I got the nicest email: "Thanks again...very thoughtful of you...but I should have expected that from a fella named Evans." 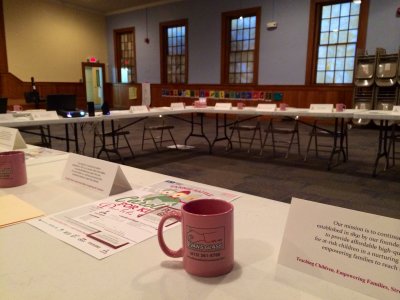 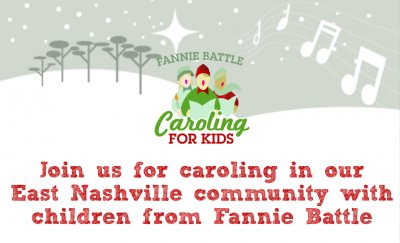 You think of Bill Evans as a runner, and he is. But, on Saturday, August 18, he was a volunteer at the Vaco Brentwood Kids’ Triathlon held at the YMCA in Maryland Farms in Brentwood. Over 400 kids, competing in three age groups, swam, biked and ran on this beautiful summer day. For real early birds, the girls “Tri-It-On” Triathlon took place at 7:00 a.m. Like many others, Bill and his wife Sue, volunteered their time and talents to help this event go smoothly. And, if you have ever volunteered or been involved in any type of event such as this, “smooth” is what everyone strives for! 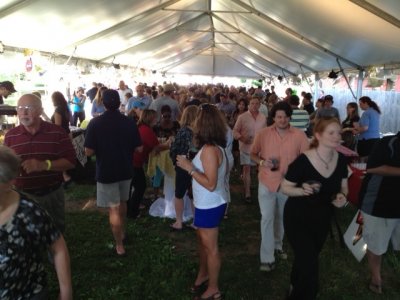 For other creative ways to support Fannie Battle Caroling for Kids, visit www.fanniebattle.org/caroling

Sue and I were accompanied to the Yum!East festival by Marc and Julie Severance. Yum!East was a benefit for the Fannie Battle Day Home for Children. Evans Glass Company was the pint glass sponsor. The festival had 20+ food vendors and several craft brew vendors. Fannie Battle sold 680 out of 700 potential tickets to the festival. I anticipate continuing Evans Glass’ relationship with Fannie Battle. 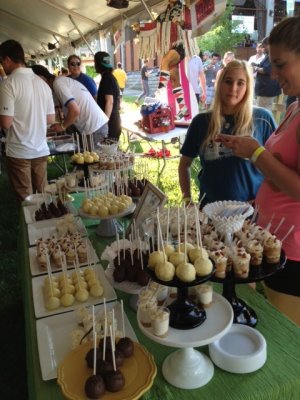 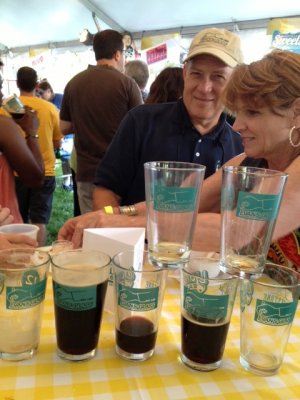 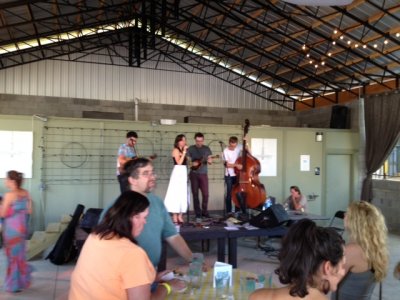 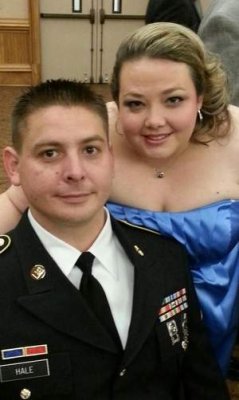 Keith Hale was on the front line in defense of America while serving in Iraq, but when the veteran returned to Nashville, he needed someone to step up and fight for him.

The U.S. Army sergeant was left severely wounded with brain and nerve damage after a June 2010 incident while on his second tour of duty in Mosul, Iraq. Upon his release from the Warrior Transition unit at Fort Campbell, he was considered 90 percent disabled and suffers from memory loss.

Hale; his wife, TiAnna; and their three children were forced to move in with his mom, while waiting on a letter from Veterans Affairs qualifying him for a mortgage loan guarantee. However, her home lacked the wheelchair accessibility that Hale needed.

And when the VA was unable to authorize funds to build the ramp in a timely manner, the Coalition to Salute America’s Heroes stepped up. Organization officials heard of Hale’s plight through a board member who lives in Franklin. They rallied volunteers and local companies, including Evans Glass and Shaub Construction, to build a ramp at Hale’s mother’s house. The crew also constructed a smaller ramp inside, as well as another that allows Hale to access the back patio for one of his favorite pastimes — cooking on his grill. “This has really helped me a lot as I don’t need anyone to help me get in and out of the house,” said Hale, 33.

TiAnna Hale says the ramp eased the accessibility concerns but also bought back her husband’s independence and confidence.

“They were so quick at getting the ramp in here and people together and took it from there,” she said. “Words can’t express how thankful we are.”

The couple spent months waiting for construction to be complete on a custom house retrofitted for wheelchair accessibility. But delayed paperwork from Veterans Affairs, they say, prevented them from closing on their home loan. It could be up to 11 months before they receive the needed paperwork, TiAnna Hale said.

Jan Dew, public affairs officer with the Veterans Affairs Regional Office in Nashville, said she didn’t have specifics about Hale’s case, but could research it further upon his request.

“We try to provide a lot of different avenues for assistance, and there is a certain amount of time it takes to process a claim,” she said. “If there is something they are not sure about what kind of forms they need to file, we do provide different avenues to get the right information into us.

“The more information we have that is sent in by the veteran, the better it is.”

Coalition to Salute America’s Heroes, a Leesburg, Va.-based organization, is dedicated to rebuilding the lives of severely wounded veterans. The organization regularly provides gift checks to cover such things as meals, medical and utility bills.

“It’s an unfortunate reality in today’s world that brave men like Keith Hale return home from the battlefields of Iraq and Afghanistan with severe injuries and our government simply isn’t there for them,” said David Walker, president and CEO of the Coalition to Salute America’s Heroes.

“But thanks to a few generous people and companies in Nashville, Keith and his family got the help they needed.” 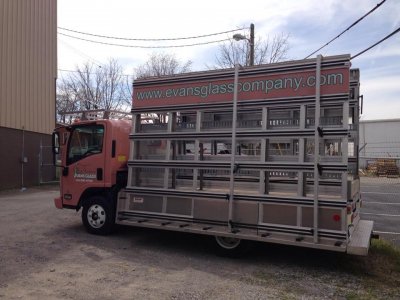 D. Wright wrote on 3/6/13: “I must admit that when I am in Nashville and see one of your trucks, I smile and think of your mom and the pink coffee cup. Do you guys still have the pink coffee cups for promo or are they now just collector’s items?”

I ordered coffee and the lady served it in a pink cup. I asked her where she got it and she a friend got it at a thrift store. After introducing myself and she said she sees our pink trucks all the time. I gave her 6 more pink cups. Now Evans Glass Company has 2 places serving coffee in our cups: Firefly and Douglas Corner. 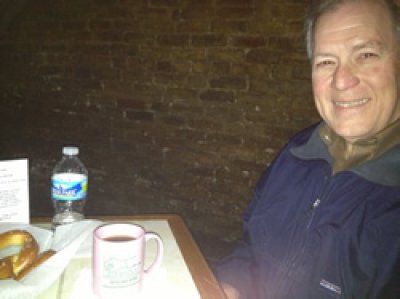